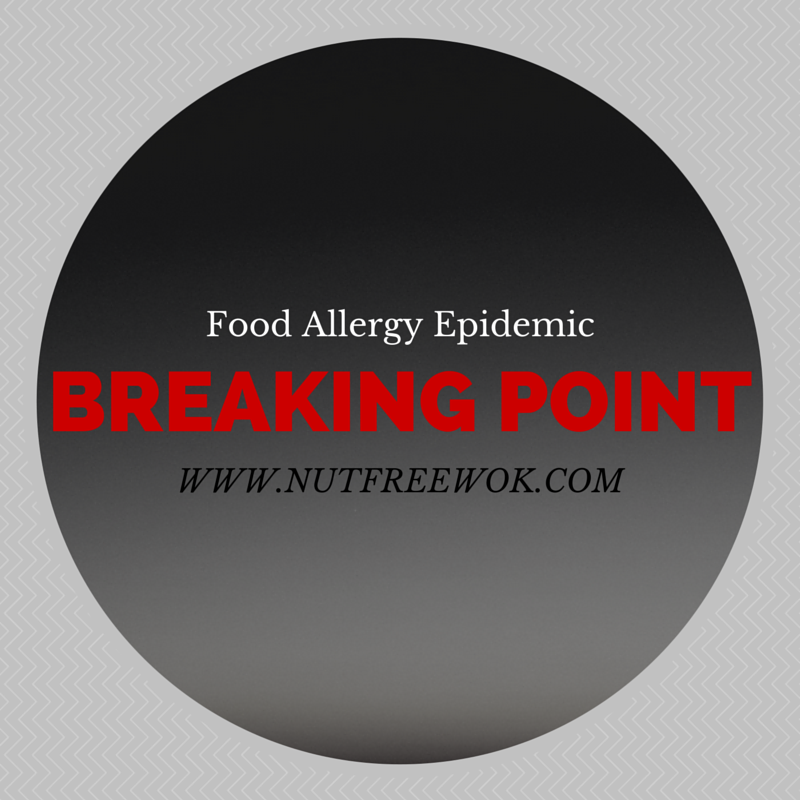 I will always consider November 2014 as a breaking point for food allergy and anaphylaxis, the time when everyone who loves someone with life threatening allergies must come together and make a difference to fight back this epidemic. Three deaths due to food allergy and anaphylaxis in one month, three devastated families and communities, three lives tragically lost too soon. To add insult to injury, a school board member suggesting shooting children with food allergies as a solution to how to manage food allergies in schools. It is entirely possible that things will get worse, there will be more deaths, there will be more humorless punchlines but I have decided that this is a breaking point and it’s time for all of us to make a difference now before it’s too late.

Joseph DeNicola was 7 years old, from Staten Island, NY, had a severe allergy to milk when he went trick or treating on Halloween with his father, Anthony, followed by a pizza party with family and friends. Joseph had trouble breathing, his dad administered an epipen and rushed him to an ER where Joseph went into anaphylactic shock and cardiac arrest . According to his dad, he did not eat his allergens and the exact cause is unknown, possibly exposure via cross contact or airborne food allergens. On November 4th his doctors took him off life support and his organs were donated. He was beloved by his family and friends, enjoyed martial arts, and was named student of the month in October.

Chandler Swink, a 19 year old sophomore at Oakland University from Auburn Hills, MI, was aspiring to be a nurse and he had a life-threatening allergy to peanuts. On November 18, he went to his friend’s house where someone was baking peanut butter cookies. It’s unknown whether he ate a cookie or was exposed via airborne food allergens or cross contact but he had an allergic reaction. Chandler went to his car to inject himself with an epipen and drove himself to an ER. He was later found collapsed on the parking lot, where he simultaneously had an asthma attack, anaphylactic shock, and cardiac arrest. He was in a medically induced coma with a 2% chance of survival. His family made a difficult decision to take him off life support, and he died on November 26, Thanksgiving eve. Chandler was loved by his family and friends, but through the years he was taunted and bullied as “the allergy kid”, his family was blamed and criticized by other parents for their public school district’s peanut free policy. Yet despite these challenges, he maintained a positive and brave attitude and was awarded a full four year scholarship for university, where he wanted to study nursing.

Jaime Mendoza, a 16 year old boy from Milwaukee, WI, had a known peanut allergy and he ate a peanut butter cookie by mistake on October 15 because he thought the cookie was chocolate chip. He became short of breath in front of his friend and went into cardiopulmonary arrest (his heart and lungs stopped working) and his friend drove him to an ER. Hospital staff tried to save his life but he had substantial brain injury which was further complicated by pneumonia. He was given comfort care since October 22 and died on November 27, Thanksgiving day, with his parents at his side. Not much is known about Jaime except that he had a family who loved him and he didn’t carry an epipen.

During the November 10, 2014 Clawson School District Board of Education meeting, a discussion of USDA requirements about snacks that are sold at school raised the question whether those requirements apply to birthday treats. One member of the audience mentioned that there were many students with food allergies, about 1 in every classroom. Linda Grossmann, one of the board members, said, “Well, you should just shoot them!” and threw up her hands amidst laughter and giggles from other board members and the audience. A copy of the video was posted online on November 22 by the Honesty for Clawson Schools and it went viral because of the shocking and outrageous comments, including those “by Jessica Back about catering to these kids and the board president, Kevin Turner suggests putting all kids with allergies in one classroom.”

A school board member is entrusted to act in the best interest of students at all times, joking about shooting any child is in poor taste, let alone children with a federally protected medical disability. School gun violence and bullying are out of control, frightening, and cause havoc and heartbreak in communities. Because there was a huge outcry of protest, Linda Grossmann resigned under public pressure and the school board issued a statement that they were stunned and saddened by her comments. I have to watch the video again to see how does more laughter and comments reflect that sentiment. The video recording of the meeting demonstrates that the board sorely lacks awareness and compassion about students with life threatening allergies.

Hello, food allergy scoffers and skeptics! I’m talking to you!

What is even more troubling about the general lack of awareness is that there are those who excuse Grossmann’s alleged “joke” and believe that food allergy parents are overreacting. Scoffers and skeptics need to realize that food allergies are no laughing matter. 15 million people are affected, including 1 out of 13 children. There is no known cause and no known cure. Life threatening allergies can happen to anyone at anytime. Prompt administration of epinephrine increases chances of survival, but it doesn’t always work. Compassion is the only acceptable response. Read about people who are gone too soon due to anaphylaxis and see if you can develop a little empathy.

Precious children are dying from food allergies and someone’s hostile gut reaction toward children with food allergies is recorded. How do we respond to these horrific events? We must respond with compassion, a strong desire to advocate and make a difference. Everyone can help because everyone knows someone with life threatening allergies.

Have access to epinephrine: Always carry epinephrine in your pocket, purse, bag. Leave extra sets at school, at work, at Grandma’s house. If you are not the person with the prescribed epinephrine or a caregiver, you can help by encouraging loved ones who don’t carry theirs to start.

Know when and how to use epinephrine: Know the symptoms of an allergic reaction, when epinephrine is needed, and how to use it. Anyone can become allergic at anytime for the very first time, you can at least call 911 for them. You can learn by asking your doctor or taking a CPR first aid class which includes an anaphylaxis unit.

Always call 911 and go to the hospital via ambulance after using an epipen for emergency care. An epipen will provide relief and allow time for the person suffering from a reaction to get to a hospital for further medical treatment and evaluation. Sometimes people have a secondary reaction called a biphasic reaction which can be life-threatening. Be supportive, don’t let someone experiencing anaphylaxis go to an ER alone.

Prevent reactions by avoiding food allergens: Read and provide ingredient labels for foods. Be aware of cross contact. Avoid serving someone’s allergen, for example don’t serve foods with cheese around a person who is allergic to milk, put it away. Avoid using using allergenic ingredients in unexpected ways, such as peanut butter flavored rice crispy treats or brownies with a peanut butter center. Those who have allergies, don’t eat unless you can read the ingredient labels and leave if your allergen is present and there is no awareness about cross-contact.

Be inclusive, food allergies are no joking matter: This is when people with life threatening allergies need help, they need the people around them to be kind and compassionate about keeping them safe and included. Do not condone bullying or jokes about food allergies. Support food allergy management policies at work and at school.

Update: Clawson School District officials began implementing food allergy training with guest speaker, Gina Clowes of FARE during one of their work sessions. I am glad to see the progress.

What do you think about this series of events? How can we change how people respond to children with life threatening food allergies? What can you do to raise awareness? Share your ideas in the comments and let’s work together to make it happen.

About Sharon Wong 246 Articles
Welcome to Nut Free Wok, a blog about Allergy Aware Asian Fare. I hope that you will find my food allergy mom experiences helpful and enjoyable to read as I write about recipes, cooking techniques, Asian ingredients, and food allergy related awareness and advocacy issues. My professional experiences include education, teaching, and a little bit of science and computers. Thank you for visiting! ~Sharon Wong, M.Ed.

This site uses Akismet to reduce spam. Learn how your comment data is processed.

Welcome to Nut Free Wok, a blog about Allergy Aware Asian Fare. I hope that you will find my food allergy mom experiences helpful and enjoyable to read as I write about recipes, cooking techniques, Asian ingredients, and food allergy related awareness and advocacy issues. I love to hear from readers and brands which are nut free and allergy aware. Please DM me via social media. All inquiries regarding guest posts on my website, adding links to existing articles, or working on my website are not welcomed and will be marked spam.

Love my posts? Receive an email alert for new posts and newsletters from NutFreeWok.com. Subscribe today, I won't send you any spam!